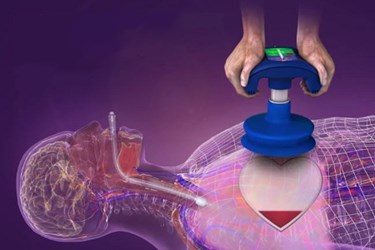 ZOLL Medical announced that its ResQCPR system had been granted premarket approval from the FDA. With this approval, the company will begin distribution in the U.S. market and expects a mid-2015 launch for the system’s CPR (cardiopulmonary resuscitation) assist devices.

The ResQCPR system consists of two devices that are used together in conjunction during CPR on adult patients during out-of-hospital, non-traumatic cardiac arrest, according to an FDA press release.

The first of the system’s two components, the ResQPump Active Compression Decompression CPR device, is a suction cup with a double grip handle. The device is equipped with a pressure gauge and timing mechanism to allow rescuers to monitor depth and speed of compressions.

The second component, the ResQPod 16.0 Impedance Threshold Device, is a face mask and breathing tube that prevents the intake of air during chest decompressions, reducing pressure in the chest and increasing blood flow to the heart.

The system was designed to improve the circulation of oxygenated blood to the heart and brain during traditional CPR. According to a ZOLL press release, clinical studies showed a 49 percent increase in survival to one year over patients who received manual CPR alone.

The device was designed by Advanced Circulatory Systems (ACS), a company ZOLL acquired in December of last year.

Last May, the ResQCPR system received a favorable recommendation from the FDA Circulatory System Devices Advisory Panel. It was the panel’s opinion that the device was reasonably safe and that benefits outweighed the possible risks involved in its implementation.

According to the ZOLL press release, Tom Aufderheide, lead investigator of the clinical study, called the device the “most significant advance in the field of cardiac arrest since defibrillation.”  In Aufderheide’s opinion, the system should become the new standard of care in heart attack intervention.

“The ResQCPR System is a huge advance in the treatment of cardiac arrest and we look forward to working with clinicians and rescuers around the country to implement this new system of care to increase the likelihood of survival from cardiac arrest and the potential to return patients to a full life after critical medical emergencies,” said Mark Black, president of ACS, in the ZOLL press release.

“Most people who suffer cardiac arrest outside of a hospital die,” said William Maisel, acting director of the Office of Device Evaluation in the FDA’s Center for Devices and Radiological Health (CDRH), in a statement released by the FDA. In his opinion, the ResQCPR system increased chances for patient survival.

The American Heart Association estimates that over 300,000 American suffer an out-of-hospital cardiac arrest and 40 percent receive CPR from a bystander. Currently, the survival rate for these events is 9.5 percent.