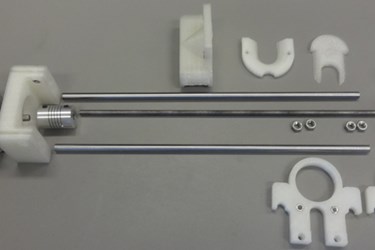 Lab equipment costs are a major consideration when planning experimental work. However, a recent open access contribution from Michigan Technological University (MTU) can help other researchers save a significant amount of time and money.

When planning an experimental program, the cost of the necessary equipment is often a constraint. When it comes to designing experiments, the number of samples that can be run at one time is often determined by how many machines you have available. Professor Joshua Pearce at MTU recently faced a similar scenario with an experimental series that required syringe pumps. Instead of accepting the status quo, his team decided to tackle the issue independently.

“What’s beautiful about what Joshua is doing is that it lets us run three or four experiments in parallel, because we can get the equipment for so much less,” said biomedical engineer Megan Frost in a recent press release. Megan uses the syringe pumps in cell culture experiments. “We’d always wanted to run experiments concurrently, but we couldn’t because the syringe pumps cost so much. This has really opened doors for us.”

The team has published their design in the journal PLOS One, making it open access for anyone who wishes to use it. Additionally, the design can be tailored to different applications.

“Not only have we designed a single syringe pump, we’ve designed all future syringe pumps,” said Pearce. “Scientists can customize the design of a pump for exactly what they are doing, just by changing a couple of numbers in the software.”

A pump built to the MTU specifications costs about $50 and can be substituted for pumps that cost between $250 and $2,500, according to the press release. The team has also figured out how to use a small Raspberry Pi computer for a wireless controller, which allows for remote access.

Developing open access designs for scientific equipment that can be 3D printed is a trend that is rapidly growing. According to the press release, UC Berkeley’s Tekla Lab and OpenLabTools at the University of Cambridge are undertaking similar initiatives. In fact, in an article published recently on Med Device Online, an open access, 3D printable microscope was reviewed that is designed to work with a number of common cellphones.