Good Money No Longer Goes To Die In Neuroscience 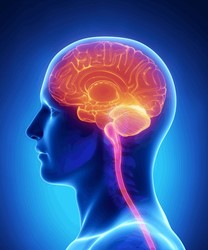 The human body is miraculous in its ability to heal. We cut ourselves shaving and the wound quickly scabs over, healing completely in a couple weeks. We break a bone in our arm or leg and the ends of the broken bone knit themselves back together, healing in a couple months. But, what happens when we injure our brain?

“If you think of traumatic brain injury (TBI), there is virtually no treatment for the symptoms. When we talk about people at any given moment having chronic symptoms of TBI, we are talking about 5 million people in the U.S.,” explains Phil Deschamps, president, CEO, and chairman of Helius Medical Technologies. “Most of those people have been told, ‘sorry, there’s nothing more we can do for you, so go do your occupational therapy to learn to live with your deficit.’”

Deschamps and Helius have developed a portable neuromodulation stimulator (PoNS) designed to amplify the brain’s ability to heal itself. The PoNS is an investigational, non-invasive wearable medical device being studied for the treatment of neurological symptoms caused by disease or trauma. PoNS therapy combines use of the device with physical therapy, and has been studied in a pivotal, multicenter clinical trial for the treatment of balance disorder related to mild to moderate TBI. I touched on this new technology in an earlier article that focused more on its future applications treating chronic conditions like multiple sclerosis and Parkinson’s disease.

According to the U.S. Centers for Disease Control, TBI is a serious public health problem in the United States. The Brain Facts Book (a public information initiative of the Society for Neuroscience) reports that no pharmacological or biologic treatment for improving outcomes of traumatic brain injury has yet been approved. Current clinical approaches include rehabilitation to teach patients how to cope with their specific injury-related symptoms. Published research shows there are approximately 5.3 million Americans living with a TBI-related disability, and the consequences can affect all aspects of an individual’s life. Since 2000, more than 287,000 U.S. service members have sustained a TBI, according to the Defense and Veterans Brain Injury Center.

Helius Medical Technologies describes the potential impact of PoNS therapy as follows: “As a result of their disease or injury, many patients are left with disrupted neural networks in the brain that are unable to carry nerve impulses completely or efficiently. Neural impulses are the signals responsible for directing bodily functions, such as movement control or sensory perception. Researchers believe that significantly increasing activation of these neurons through electrical stimulation, combined with physical therapy, may help reorganize and reactivate the networks responsible for those functions.”

Where Did PoNS Come From, And How Does It Actually Work?

Deschamps explained that the technology fundamentally came out of the University of Wisconsin and the research of Dr. Paul Bach-y-Rita. “Necessity is the mother of invention; his father had a massive stroke and, based on his neurological background, Bach-y-Rita fought hard to rehabilitate his father over 12 years, forcing him to fend for himself and do rigorous exercise,” Deschamps said. The idea was, if people could exercise and focus effort on the deficit they are trying to overcome, they could be rehabilitated.

Bach-y-Rita proved his theory in his work with his father. “Over 12 years, Bach-y-Rita’s father, who had been completely paralyzed after the stroke, went back to being a university professor and got most of his faculties back,” Deschamps concluded.

Then, serendipity entered the picture. The U.S. Defense Advanced Research Projects Agency (DARPA) was looking for a way to enable Navy Seals to swim in sensory-deprived environments without going around in circles. Bach-y-Rita had already been experimenting with the tongue and knew that it was a spatially-aware organ; the tongue can be stimulated on the left or right to guide the sensory-deprived swimmers, as if by remote control. This led to a theory that the same type of device that could help to maintain vestibular function during sensory deprivation might also be able to help restore that function when a brain is diseased or has experienced a traumatic injury.

“To add to the serendipity, one of the inventors, Mitch Tyler, had a bad car accident and had a traumatic brain injury, and was thus patient number one. They used the technology to rehabilitate Tyler and, when it worked for him, they began to develop it as a product,” Deschamps added.

Today, the PoNS device delivers specially-patterned electrical stimulation — developed to mirror nerve impulses to the brain — through 143 gold-plated electrodes on the mouthpiece, which is placed on the tongue. Twenty minutes of electrical stimulation is coupled with targeted functional therapy (e.g., physical, occupational, relaxation, or cognitive) to address the patient’s specific deficits.

Helius Medical Technologies cites clinical research that has shown electrical stimulation of the tongue activates two major cranial nerves – the lingual nerve (part of the trigeminal nerve) and the chorda tympani (part of the facial nerve). Electrical stimulation of the cranial nerves creates a flow of neural impulses, which then are delivered directly into the brain stem and cerebellum – the main control centers for many life functions, including sensory perception and movement. From the brain stem, these impulses travel throughout the brain and activate or reactivate neurons and structures involved in human function: the cortex, spinal cord, and potentially the entire central nervous system. A good example of the power of the tongue to send intense messages directly to the brain, per the researchers, is the intensity of the signal the brain receives when a person accidently bites down on his/her tongue.

Though Helius has been successful in raising money, netting $42M over three-and-a-half years, Deschamps thinks that success is more a reflection of potential market than a vote of confidence for these types of technologies. I asked what his biggest challenge has been, and he said, “overcoming the fantastical nature of the device, we need hard science (data) to be convincing. In the old days, they used to say good money went to die in neuroscience.” With a clinical trial completed, a 510(k) submission likely early next year, and a huge IP portfolio of 61 patents (8 of which are method patents), Helius appears poised to make a difference for a lot of people impacted by brain disease or injury.