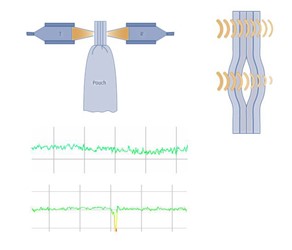 PTI's Seal-Scan® and Seal-Sensor® are non-contact airborne ultrasonic testing technologies.  In order to use ultrasonic inspection effectively, it must be possible to place the seal in a direct line between a pair of transducers and move it (or move the transducers) along the seal. The ultrasound is transmitted and reflected at the transition from one media to the next. The greater the acoustic difference between mediums (most evident at a gas to solid transition) the more sound is reflected and the less sound transmitted through. The variation of the material thickness has only a minor effect.

Any material fold, foreign media inclusion and even a microscopic air gap between layers of pouch material causes the significant reflection, so transmitted signal is lower. A small cut, abrasion or missing layer in a material causes the less reflection, so transmitted signal is higher. Therefore, the level of a signal received after passing through the seal is a function of the seal quality. Various types of defects, visible and invisible, leaking and non-leaking, process-related and random, are detectable.