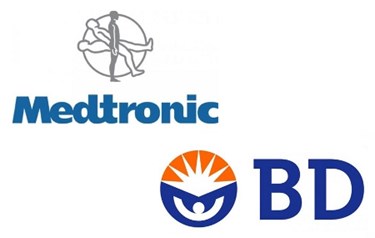 Slated for launch in 2016, the product received approval for sale by Health Canada in January, and it gained 510(k) clearance from the U.S. Food and Drug Administration (FDA) in April. A CE-mark application is pending.

"Medtronic is committed to advancing innovation across the entire insulin pump system, including infusion sets, to improve outcomes and expand options to satisfy different patient needs, body types and lifestyles," said Annette Brüls, VP and GM of Diabetes Service and Solutions at Medtronic, in a press release. "Our partnering with diabetes technology leaders, such as BD, will give more people with diabetes access to these innovations so they can enjoy greater freedom and better health."

Medtronic's agreement with BD is the latest partnership the company unveiled during this weekend's American Diabetes Association's 75th Scientific Sessions in Boston. During the event, Medtronic also announced deals with Samsung and Glooko intended to widen its diabetes solutions portfolio.

BD's new insulin infusion set is its first within the diabetes infusion set category. Partnering with Medtronic — which holds 74 percent of the U.S. market for insulin pumps — is vital to BD in widening its new product's reach.

"We are very excited to partner with a global leader like Medtronic to ensure that the benefits of BD FlowSmart technology can be made widely available to as many people living with diabetes as possible," said Kenneth Miller, worldwide president, BD Medical-Diabetes Care, in the Medtronic press release. "By increasing the reach and availability of this technology, we have an opportunity to enhance the use of insulin pump therapy by providing potentially more consistent insulin delivery and fewer flow interruptions. This technology is an extension of BD's long-standing commitment to deliver injection solutions, and builds on previous BD research that has advanced the science and understanding of insulin delivery as well as patient comfort."

In a BD press release, the company said its BD FlowSmart technology addresses "the Achilles heel" of today's insulin pump therapy: infusion sets prone to silent occlusions. These continuous rises in pressure of at least 30 minutes generally do not set off pump alarms, contributing to unexplained hypoglycemic events in patients. BD claims that its new infusion set provides more consistent insulin delivery and reduces the occurrence of silent occlusions.

In the release, BD touted the results of three studies, each of which showed the effectiveness of the BD catheter set versus other commercially available sets. In the first study of 60 participants, silent occlusions were reduced by 75 percent when BD's new infusion set was used. The second study, utilizing MRI imaging, showed that the side port provided an additional flow pathway for a more stable flow of insulin. A third study demonstrated an 88 to 95 percent reduction in mean percent time of flow interruption while using the BD set, compared to other commercial catheter sets.

BD collaborated with the Juvenile Diabetes Research Foundation (JDRF) and the Leona M. and Harry B. Helmsley Charitable Trust in developing the FlowSmart technology.

"JDRF is thrilled to have partnered with BD and the Helmsley Charitable Trust to bring the insulin infusion set with BD FlowSmart technology to people with type 1 diabetes," said Aaron Kowalski, Ph.D., chief mission officer for JDRF, in the Medtronic press release. "This new infusion set is an important step forward in improving insulin pump therapy, and we hope ultimately, artificial pancreas systems."