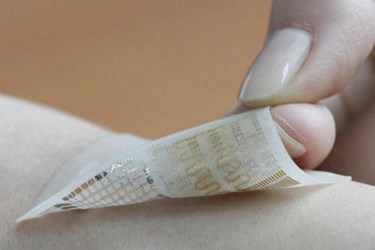 A team of researchers from South Korea and the United States recently developed a prototype nanotechnology device that can monitor its wearers’ muscle activity and administer medication as needed. The device could prove beneficial to those suffering from movement disorders such as epilepsy and Parkinson’s disease.

“Wearable systems that monitor muscle activity, store data, and deliver feedback therapy are the next frontier in personalized medicine and healthcare,” the group of researchers wrote in a report published in the journal Nature Nanotechnology. “However, technical challenges, such as the fabrication of high-performance, energy-efficient sensors and memory modules that are in intimate mechanical contact with soft tissues, in conjunction with controlled delivery of therapeutic agents, limit the wide-scale adoption of such systems.”

The researchers claim to have addressed these limitations with the help of nanotechnology. The device they created is flexible, stretchable, about the size of an average Band-Aid, and is around one millimeter thick. Built using layers of nanomembranes and nanoparticles, the device is aimed at both monitoring patient activity and administering medication.

“The team use silicon nanomembranes in the motion sensors, gold nanoparticles in the non-volatile memory and silica nanoparticles, loaded with drugs, in a thermal actuator,” the group’s report said.

Worn on the wrist of a patient, the device measures and records muscle activity. When the recorded data indicates that medication is needed, the device delivers the appropriate dosage using a wafer-thin internal heater. A temperature sensor monitors this action to prevent burns during drug administration, according to a news article published by The Japan News.

The prototype device has so far proven effective. “This platform overcomes the limitations of conventional wearable devices and has the potential to improve compliance, data quality, and the efficacy of current clinical procedures,” the report said.

Currently, the device relies on an external microprocessor, which could be housed inside a wristwatch. The bandage would then be attached to the watch with small wires. As the project continues to unfold, researchers hope to develop a way of making the bandage wireless and fully mobile, an article published by AFP News said.

The idea of “smart bandages” capable of providing various types of monitoring and treatment options for patients continues to gain traction. Researchers at UC-Berkeley, for example, earlier this month reported successfully “herding” groups of cells using electrical currents. The development could lead to the creation of smart bandages that would both monitor and facilitate the healing process of wounds.