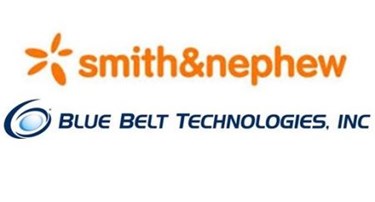 Smith & Nephew, British-based orthopedics giant, has expanded its foothold in the surgical robotics market with the $275 million acquisition of U.S.-based Blue Belt Technologies and its Navio robotics system. By combining its next-generation products with robotic technology, Smith & Nephew hopes to expand its market share and explore new surgical indications — all under the shadow of chatter about a potential takeover by Johnson & Johnson or Stryker.

Olivier Bohoun, CEO of Smith & Nephew, remarked in a press release that robotic technology is the future of orthopedic surgery, and the acquisition of Blue Belt Technologies will help the next-generation of Smith & Nephew product offerings remain competitive.

“Our experience working with Blue Belt Technologies and our customer insight has convinced us that robotics will become increasingly mainstream across orthopedic reconstruction in the foreseeable future,” said Bohoun. “This acquisition is a compelling strategic move, with the combination of complementary products and R&D programs creating a platform from which we can shape this exciting new area of surgery.”

When Bohoun came on board with Smith & Nephew in 2011, hips and knees comprised half of the company business, and before the most recent acquisition, it made up one-third. Last year, The Telegraph reported that the global economic downturn caused diminished sales in the hip and knee established markets, and Bohoun combatted these slumps by diversifying business into wound care and sports medicine, and by turning the company’s attentions toward emerging markets.

According to the company press release, Bohoun intends to use the global commercial infrastructure —which Smith & Nephew has spent the last three years building — to broaden the adoption of robotic orthopedic surgery outside the U.S.

The Guardian reported in September that Smith & Nephew stock was up two percent amid renewed chatter of a potential buy-out by Johnson & Johnson — news that joined years of speculation over a potential Stryker bid.

In 2014, Bohoun told The Telegraph that he had no interest in a “mega-merger” with a medtech giant, and commented that such moves are a “defensive” strategy to reduce costs. “These are exactly the deals we don’t want to do,” he said.

In a more recent interview, Bohoun expressed his confidence in Smith & Nephew’s ability to grow, telling The Telegraph, “We had a good quarter in the United States, our largest market, and are successfully stabilizing our European business which delivered a second consecutive quarter of revenue growth against a market backdrop that remains challenging.”