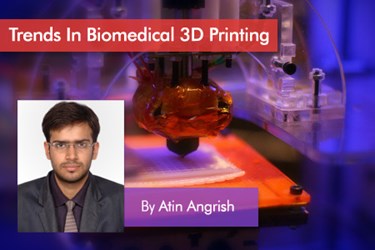 The U.S. FDA defines prosthetics as a category of medical devices intended to replace missing body parts, either inside or on the surface of the body. As such, the category can include both external prostheses like artificial limbs, and internal ones like joint replacement devices.

Prostheses can be quite expensive to obtain, driven by regulatory-related expenses, the price of advanced materials used in the devices, and hospital costs. Although health insurance may cover some this, the resulting balance can still be relatively high, especially in the United States.

In this article, we will explore the current methods used to manufacture prosthetic devices, and we will evaluate what advantages can be gained by using 3D printing to address the above mentioned issues.

The Prosthetics  Market
Prosthetics represent one of the most lucrative potential market segments for 3D printing, also known as additive manufacturing (AM). As I discussed in my previous article in this series, the number of middle-aged people requiring medical implants — including prosthetic ones — has skyrocketed over the last decade.

The prosthetics manufacturing market is dominated by a handful of companies, such as Otto Bock Healthcare, Fillauer, Ohio Willow Wood, and Hanger Ortheopedics. Together they constitute almost entire market share of the U.S. prosthetics market. These companies have been dominant players in this market for a very long time and have been able to keep their competition at bay. Aside from stiff competition, another major challenge faced by potential new entrants into the market is the high cost of FDA approvals and patents.

Owing to the relatively consistent number of suppliers and the increasing demand, the cost of prosthetic and orthotic devices has gone up instead of down. (If inflation is accounted for, prices are almost the same as they were a decade ago.) Owing to lack of access to necessary tooling methodologies, most of which have been patented by the major players, innovation has been rather slow in this sector.

For orthopedic implants, some of the fastest growing segments are knee, hip, and elbow (though the use of skull implants has also been increasing).

Conventional Manufacturing: Advantages and Disadvantages
While there are a many types of prosthetic devices available for different parts of the human body, we will keep our discussion focused on the most common ones: lower extremities (hips, legs, and feet), upper extremities (hands and arms), and craniofacial implants.

Most prosthetics are manufactured using conventional subtractive technologies, including extensive use of computer aided design and manufacturing techniques. Prosthetics such as knee or hip implants would involve high-accuracy machining processes over very hard metals or ceramics. This leads to huge amounts of energy consumption and material waste.

Development of prostheses that can be seen outside the body often requires use of materials that not only look similar to the skin of a human, but also match the strength of the body part.

In the pursuit of manufacturing efficiency and economies of scale, coupled with the limitations of incumbent manufacturing technologies, many prosthetics manufacturers have taken a “few-models-fit-all” approach. Essentially, they make several different standardized sizes and, in the case of external prostheses, neutral appearances (in terms of color, strength, texture, etc.). They use these templates to manufacture thousands of prostheses every year.

While this may be a beneficial strategy for the manufacturer, end users must often be content with the best available fit according to their built. This leads to several problems:

3D Printing And Its Potential Impact
AM is quickly becoming one of the biggest breakthroughs in the field of prosthetics and orthopedics. The ability to make custom implants is extremely valuable in today’s world of personalized medicine and in situations where cost is a significant factor.

3D printing technologies for prosthetics include the conventional stereolithography, selective laser sintering, and electron beam melting (EBM) processes, and in some cases even fused deposition modeling. These approaches are well-established and fairly easily accessible. EBM is a proprietary process patented by Arcam AB and one of the preferred methods for AM of titanium-based implants.

Depending upon end user requirements, it is possible to manufacture a custom prosthesis according to the desired parameters such as strength, surface finish, and appearance (if applicable). For example, a hip prosthetic will require a ball and socket joint with one of five material combinations for the ball and socket respectively: metal-on-metal, metal-on-ceramic, metal-on-polymer, ceramic-on-polymer and ceramic-on-ceramic. Ceramics include alumina and zirconia. Metals are typically hard steels and titanium alloys and meshes. If a polymer is involved, it is usually polyurethane.

Progress is being made in the use of biopolymers such as polylactic acid (PLA), 3-phosphoglyceric acid (PGA), and PLA-PGA composites, as well other composites such as polyether ether ketone (PEEK) and polyether ketone ketone (PEKK) for use in AM. This will help in the production of ready-to-use implants. However, to date the FDA has been rather slow in approving the use of materials other than PLA and PGA in the implants that remain inside the body.

The general method proposed for manufacturing custom prosthetics using 3D printing is shown in the figure below.

While the process appears to be fairly straightforward, there are several associated complications such as unwanted artifacts in the scan data, limited availability of biosafe materials, and a lack of industry-wide standards concerning additive manufacturing. These complications have opened new opportunities, especially in the areas of scan data conversion and prosthesis design. It is important to note that few major manufactures are promoting the use of 3D printing for prosthetics. This could be due to their significant investments in existing infrastructure of manufacturing.

3D Printing Technology Developments
Let us now look at several case studies involving the production of prosthetics and implants using AM, in non-commercial and laboratory settings. Some of the major breakthroughs in this area are not directly related to the 3D printing technology itself, but to associated elements such as materials and software.

Several companies are developing software specifically intended for 3D printing of medical devices. Some of the more popular brands are Materialise, Within Medical Software, and netfabb. Of these, Materialise and Within Medical’s offerings are specifically intended for biomedical design applications. Materialise’s software suite, called Mimics, enables users to repair and clean up scanned DICOM files, convert them to STL format (the preferred format for 3D printing), and slice the files. Within Medical’s software performs similar functions, along with optimization and finite element analysis to develop custom prostheses suited for osseointegration. Several other free open-source software platforms such as InVesalius, MeshLab, and Blender are also being used for biomedical applications, by companies and researchers alike.

Speaking of research, numerous projects have demonstrated the creation and implementation of 3D printed custom prostheses, typically with an equal or better success rate compared to commercially available products. Two of the most famous recent examples were a full skull replacement implant and the Robohand project. These two projects have been covered extensively by popular media, raising public awareness for the potential of AM in prosthetics. The addition of myoelectric systems to a 3D printed arm has also been achieved. This is a promising area of research that, if successful, will usher in a new era of low-cost prosthetic devices.

The Future Of 3D Printed Prostheses
The rapid development of AM, the proliferation of design tools, and the emergence of third-party 3D printing service providers are giving rise to a just-in-time and low-cost customized manufacturing paradigm in all industry sectors. However, the application of AM for prosthetics by major manufacturers remains somewhat distant. Most implementations of the technology are being categorized as experimental procedures.

There are several possible reasons behind the delay in shift to AM technology in prosthetics. They include lack of understanding of AM processes, slow rate of FDA approvals for new biocompatible AM materials, and the loyalty of doctors to familiar brands of prostheses. However, 3D printing and its applications are now a part of the design discourse in almost every industry — including medical — and acceptance of the technology is increasing. While it will take more time for the medical community to completely warm up to the idea of AM-based prostheses, it will happen soon.

About The Author
Atin Angrish is a 3D printing enthusiast and industry analyst. He is working as an associate consultant for ZoomRx Healthcare Research and has previously worked in the Technical Insights Division of the market research firm Frost & Sullivan. His main professional focus is on advanced manufacturing technologies and their convergence with different industries. Angrish earned his bachelor’s degree (Hons) in mechanical engineering from the Birla Institute of Technology and Science (BITS Pilani), India. He can be reached at angrish.atin@gmail.com.